So now that we have our DAW and some basic hardware, it’s time to start thinking about how you’d like to communicate with your computer and its software. A QWERTY keyboard is nice for writing this blog post, but it won’t be my weapon of choice when I want to work on music. Peripheral devices, also known as controllers, will allow you to have a tangible instrument to play with while working in a mostly digital realm; they help provide a distraction from the exhausting glow of the computer’s screen and focus your attention into something real. At the very least, they will help you move more fluidly throughout your software, help facilitate decisions, and generally reduce the time spent not playing music. 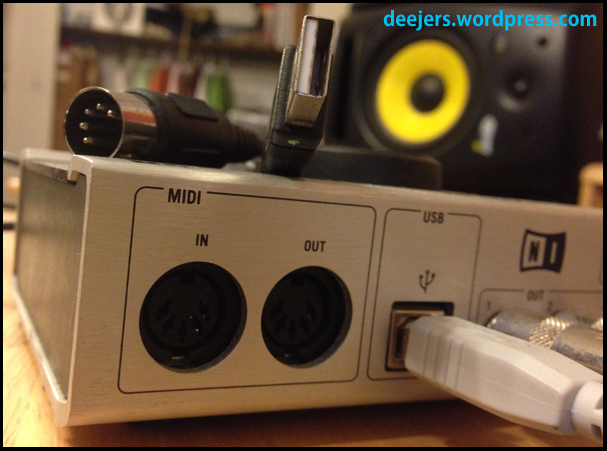 MIDI is how controllers talk to your computer – here is a MIDI cable and interface, as well as USB, which can also handle MIDI.

There are a few different types of controllers, each one having different purposes and powers. Almost all controllers communicate with a protocol called MIDI, and thanks to the evolution of technology, they are now able to communicate through a USB connection rather than with a special MIDI cable and interface. MIDI messages, sent by controllers, tell electronic instruments and software what to do (such as which notes, what tempo, etc.) and allow you to be more expressive with your computer. The style of music you would like to make or how you’d like to make it will determine which controllers are right for you.

This M-Audio Keyboard has 49 keys and can connect with both MIDI cables and USB.

Keyboards are the electronic version of the piano, and probably one of the only controllers that resembles a traditional instrument. These generally come with 49 keys (four octaves) and are an amazing tool for songwriting and getting musical ideas flowing. If you have experience with playing piano or just need some sort of peripheral device to start with, then these are probably your best bet. I think a MIDI keyboard should be considered by anyone making music with a computer; they’re fun to play and are a great starting point for the creative process. Also, pretty much any MIDI keyboard is compatible with any software you can find, making them extremely reliable and easy to use.

The Novation Launchpad is a grid controller consisting of 64 back-lit buttons.

These types of controllers don’t really do anything that a MIDI keyboard can’t, but they do provide a different sort of feel and tactile feedback that is very important. They usually consist of rows of rubber pads that can be used to control drum machines, activate samples, or do almost anything you assign to them. Many of the newer types of these controllers also have LED lights behind the pads to give the user more information or to serve different functions. Drum Pads were designed for – you guessed it – playing drums, but some artists have began using them to play their music in original and creative ways. It’s really up to the musician’s imagination to figure out how they want to use the power of these controllers.

The Novation Nocturn has 8 knobs, 16 buttons, and a cross-fader that can be assigned to whatever you’d like.

There is a lot of variation within this type of controller, but each one generally consists of two things; knobs and faders. These are designed to control the volumes of different sounds, modulate effects, or do anything else that makes sense to control with faders and knobs. Just like with drum pad controllers, there is a lot of potential for creativity with mixers – they are rather simple but will provide you with a lot of control over your music – it’s up to you to harness it.

It is also important to note that there are controllers that fit into a couple of these classifications. It’s not uncommon for the higher-end MIDI keyboards to have drum pads and/or mixers on them as well. There are also many drum pad controllers that come with a bunch of knobs to fiddle with and a built-in mixer. These types of controllers are almost always more expensive than their simpler counterparts, but perhaps they might be a good investment if multiple types of controllers fit your style.

So these are the three types of MIDI controllers – keyboard, drum pad, and mixer – that make up the basic varieties that you can buy for making music with on your computer. It has also become very popular for the more tech-savvy musicians to create their own controllers to produce and perform with using available hardware and materials. The Monome is an example of a great independently-made controller, and it has even been adopted by large electronic acts such as deadmau5, Pretty Lights, and Sound Tribe Sector 9.

Controllers are what make producing electronic music fun; they are the instruments and tools of the digital musician. Try many different options, and think about which controllers inspire you the most or take care of your musical needs and desires. Finding which one (or combination of a few) that works best for your style is crucial to having an enjoyable and creative time while making music. Now take control of your studio!